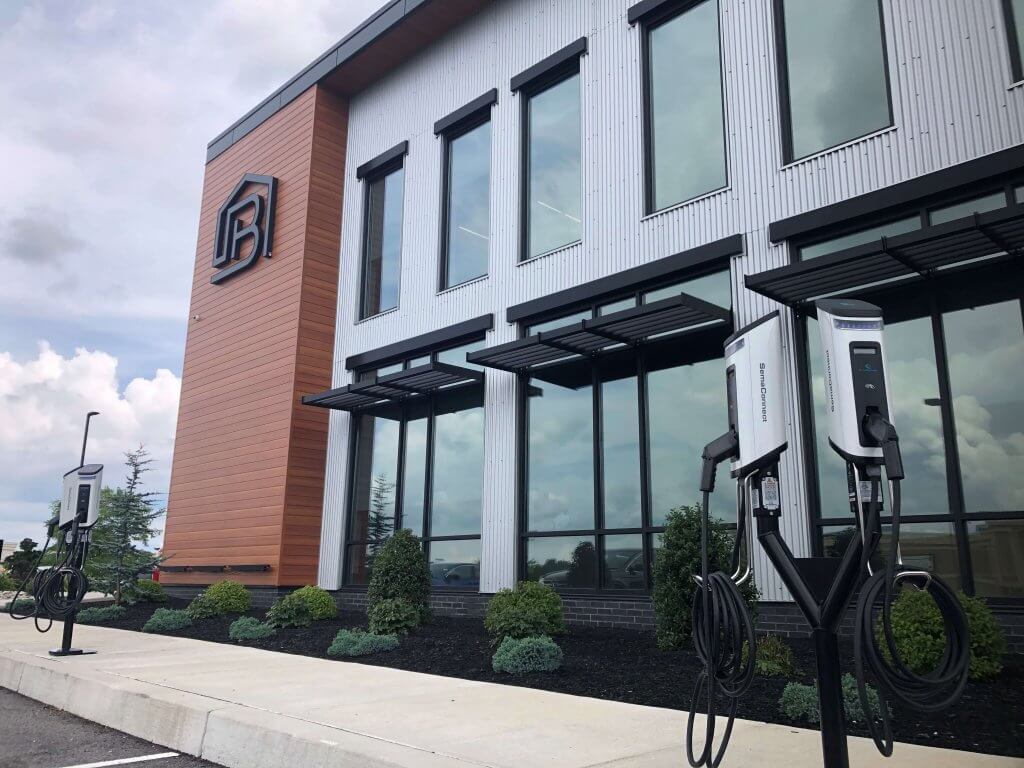 Today the home-building company has seen a return on that as a tool to provide electric vehicle owners with a place to charge their vehicles and participate in the local economy.

“Our goal with this investment was to encourage electric vehicles and bring to the community a spot for them to charge and have the ability to walk to local stores or have a drink at Starbucks,” said Michael Burkentine, vice president of sales and business development at Burkentine. “Innovation is something we embrace as a company and we have even been designing electric charging station locations in as many Burkentine communities as possible. “

Pennsylvania businesses that invest in electric vehicle charging equipment for public use aren’t doing it to earn money, but rather as a convenience that will attract more business, said Colton Brown, an energy specialist with the Pennsylvania Department of Environmental Protection. Brown, who coordinates the department’s electric vehicle education initiatives, spoke to an audience of state airport leaders this week for a roundtable hosted by the Aviation Council of Pennsylvania.

As of April, Pennsylvania was tenth in a list of states with the most charging station locations, according to the Alternative Fuels Data Center. The list is topped by California, New York and Florida. Despite Pennsylvania’s high ranking in relation to other states, the Commonwealth continues to have large gaps between stations, many more than 50 miles, said Brown.

Charging stations for electric vehicles vary in charge times. Most electric vehicles come with a level one charging cable that can plug into any regular 110V AC wall outlet. These cables charge at a rate of about four to five miles of travel per charging hour. Level two stations can add 25 miles of travel per charging hour. These are stations usually found at businesses and parking lots. Home owners can also get level two charging installed in their homes.

Level three, also known as DC fast charging, can charge a vehicle in less than an hour, but cost significantly more than their level two counterparts.

The federal tax credit has consistently been extended in one year increments, but it is impossible to know for how long, said Brown.

By participating in Driving PA Forward, a business can be reimbursed by up to 70% at a maximum of $250,000 for installing DC fast charging stations. For a level two charger, a business can earn a $4,000 maximum rebate per plug or 70% maximum rebate of a total project for a public access, networked, non-government-owned property.

Level two charging stations cost $15,000 and $25,000 depending on a variety of installation variables.

“For the cost of putting in a unit, the two biggest factors are the type of equipment you use,” said Brown. “Is it a high-end function or is it basic equipment. The other factor is your site; how far you are from the supply, that sort of thing.”

For DC charging, the cost can be as high as $200,000 a station, said Michael Johnson, key accounts and senior safety specialist with York-based electric utility Adams Electric Cooperative. Johnson is an authorized representative of Adams Energy Resources LLC, an organization founded by Adams Electric in 2019 that invests in charging infrastructure in the midstate.

Pennsylvania’s incentives were the final push that Adams Energy needed to begin its service. The company has built ten charging stations with more to come.

“Even after getting the grant money we don’t know if we will get a return on investment,” said Johnson. “If you don’t have that money, it pushes out your return. The grant money is critical.”

Adams installs level one and two stations and retains ownership of them for five years. After that the clients can ask to have it removed, continue the agreement on a yearly contract, or buy the station from Adams Energy at market price. A big business benefit of having stations is the incentive for e-vehicle owners to linger. Because of this, attractions have seen an immediate impact on business, said Johnson.

“The ski resorts are really enjoying the benefits,” he said. “The first one we turned on was at Liberty Mountain Resort right before the pandemic. The assistant manager said that we could have put five more in.”

Over time, state and federal incentives decline as the country’s electric vehicle charging infrastructure grows, but many businesses are deciding to invest in chargers while they can still see savings, said Travis Eckert, founder of ChargeForward LLC, an electric vehicle consultant in Harrisburg, and EV manager with Baltimore-based MD Energy Advisors.

“The most forward thinking companies see it as the future and they see it as an amenity that they need to offer,” he said. “Whether it’s a hotel, workplace or any commercial real estate really. They see it as a requirement.”

Currently 80% of charging occurs at home, but for people living in condos or apartments who can’t control what charging their building offers, a charging station in their complex could be a deciding factor for where they choose to live, said Eckert.